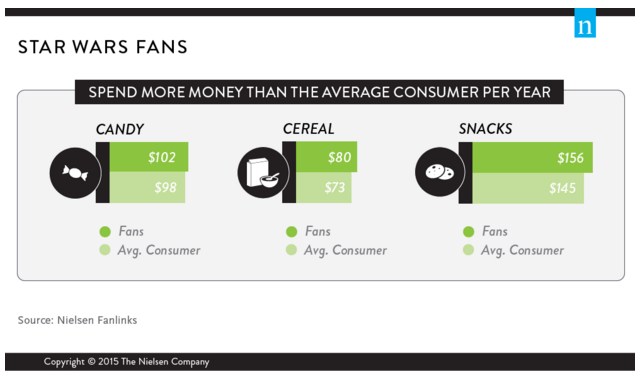 After staying mostly dormant for a decade, the Star Wars empire is ready to strike back.

The newest installment of the movie franchise, The Force Awakens, arrived in theaters Dec. 18, and fans around the world were frenzied with excitement. This giddy anticipation extends to marketers, who are predicting that the new film will be a massive—and lucrative—blockbuster.

Their optimism appears to be well founded. Nearly 40 years after the first movie was released, Star Wars remains a cultural phenomenon with broad appeal across many valuable demographics.

According to Nielsen N-Score, which measures celebrities’ endorsement potential, Carrie Fisher, Harrison Ford, and Mark Hamill all rate above the average N-Score for a TV/film actor (74). Ford has the highest N-Score of the three major returning cast members (100 out of 100), as 90% of Americans are aware of him and 56% rate him as influential.

This enduring appeal of the cast is important for marketers, as previous Nielsen research has found younger generations are most likely to report being influenced by celebrity endorsements.

Overall, Star Wars fans are 17% more likely to be Gen Xers (aged 35 to 44) compared with the average American. However, these original aspiring Jedis are passing their love of the franchise on to others. In fact, fans are more likely to be part of family households with kids under the age of 18 than the average consumer.

Star Wars aficionados are also 9% more likely than the average American to be part of households with $70,000 or more in annual income.

Given fans’ propensity to spend, it’s no wonder that The Force Awakens already has a number of high-profile official sponsors, including brands in the personal care, food, auto and technology categories. Star Wars fans spend more than the average moviegoer across these product categories combined ($4,300 vs. $4,100 annually).

So what do fans spend their money on? Given that many have young families, it’s not surprising that they buy more candy, graham crackers, dried fruit snacks, cereal, pasta and adhesive bandages than the average moviegoer.

With Disney/Lucasfilm planning to release a new Star Wars-related movie every year through 2020, and a new book tied to the film is due to be released in early 2016, the number of fans—and potential marketing opportunities—are sure to grow. As Yoda might put it: Just the beginning, this is.

Thank you to folks at Neilson for this article. To read the web version, click here.

Evernote: 4 Tips to Get the Most Out of Your Digital To-Do List

Social Media 101: How to Add a Video on Facebook