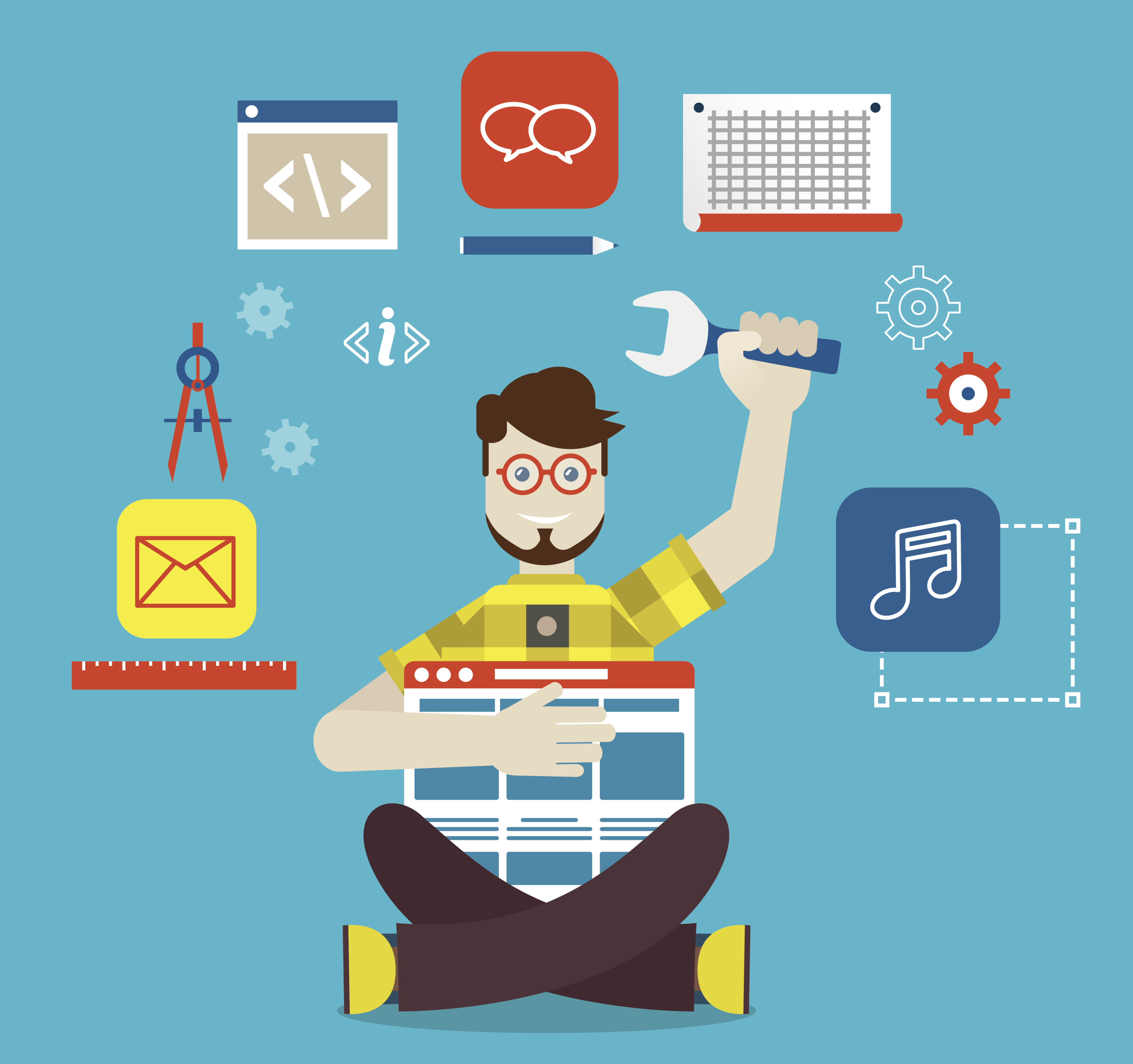 Interaction design has its origins in web and graphic design, but has grown into a realm of its own. Far from merely working with text and pictures, interaction designers are now responsible for creating every element on the screen that a user might swipe, click, tap, or type: in short, the interactions of an experience.

What is Interaction Design?

Interaction Design (IxD) defines the structure and behavior of interactive systems. Interaction designers strive to create meaningful relationships between people and the products and services that they use, from computers to mobile devices to appliances and beyond. Our practices are evolving with the world.” —The Interaction Design Association(IxDA)

Interaction design began the day the first screen was designed to hold more than static copy. Everything from a button to a link to a form field is part of interaction design. Over the past several decades, a number of books have been released that explain facets of interaction design, and explore the myriad ways it intersects and overlaps with experience design.

Although interaction design spans myriad types of web and mobile applications and sites, there are certain methodologies that all designers rely on. We’ll explore some of the more common methodologies here: goal-driven design, usability, the five dimensions, cognitive psychology, and human interface guidelines.

Goal-driven design was popularized by Alan Cooper, in his book The Inmates Are Running the Asylum: Why High-Tech Products Drive Us Crazy and How to Restore the Sanity, published in 1999. Alan defines goal-driven design as design that holds problem solving as a highest priority. In other words, goal-driven design focuses first and foremost on satisfying specific needs and desires of the end-user, as opposed to older methods of design, which focused on what capabilities were available on the technology side of things.

Today, some of the points Alan brings up seem obvious, since designers rarely select interactions based solely on development constraints. However, at its heart, the methodology is all about satisfying the end-user’s needs and wants, which is just as necessary today as it ever was.

The process involved in goal-driven design, according to Alan, requires five shifts in the way we think as interaction designers.

Usability may feel like a vague term, but at its heart, designers are simply asking “can someone easily use this?” It’s been explained in books and online in a myriad of ways, and we will review a few different definitions to uncover some common themes and nuances:

Meanwhile, Nielsen and Schneiderman explain usability as being made up of five principles:

Lastly, the international standard (ISO 9241) has also broken down the word into five principles.

Clearly, there are common themes that make up what it means for an interface to be “usable.” Regardless of the usability principles a designer follows, it’s an important consideration for any interface.

In Bill Moggridge’s book of interviews, Designing Interactions, Gillian Crampton Smith, an academic in interaction design, introduced the concept of four dimensions of an “interaction design language.” In other words, these dimensions make up the interactions themselves, and as a result they make up the communication between a user and the screen. The four original dimensions are: words, visual representations, physical objects or space, and time. More recently, Kevin Silver, senior interaction designer at IDEXX Laboratories, has added a fifth dimension, behavior.

Using these five dimensions, an interaction designer can pay attention to the very experience the user has when communicating and connecting with a system.

Cognitive psychology is the study of how the mind works, and what mental processes that take place there. According to the American Psychological Association, these processes include “attention, language use, memory, perception, problem solving, creativity, and thinking.”

While psychology is an immensely broad field, there are a few key elements of cognitive psychology that are particularly valued, and in fact may have helped form the field of interaction design. Don Norman called out many of them in his book, The Design of Everyday Things. Here are just a few.

An interaction designer is a key player throughout the entire development process. He or she has a set of activities that are key to the project team. These typically include forming a design strategy, wireframing key interactions, and prototyping interactions.

Although the boundaries here are fuzzy, one this is certain: an interaction designer will need to know who she is designing for and what the user’s goals are. Typically, this is provided for her by a user researcher. In turn, an interaction designer will assess the goals and develop a design strategy, either independently or with help from other designers on her team. A design strategy will help team members have a common understanding of what interactions need to take place to facilitate user goals.

After the interaction designer has a good idea of the strategy motivating her design, she can begin to sketch the interfaces that will facilitate the necessary interactions. The devil here lies in the details: some professionals will literally sketch these interactions on a pad/dry-erase board while others will use web applications to aid them in the process, and some will use a combination thereof. Some professionals will create these interfaces collaboratively while others will create them alone. It all depends on the interaction designer and his or her particular workflow.

Depending on the project, the next logical step for an interaction designer might involve the creation of prototypes. There are a number of different ways in which a team might prototype an interaction, which we won’t be covering in extensive detail here, such as html/css prototypes, or paper prototypes.

One of the hardest parts about being a practicing interaction designer is the speed of change in the industry. Every day, new designers are taking the medium in a different direction. Consequently, users are expecting these new kinds of interactions to appear on your website. The prudent interaction designer responds to this evolution by constantly exploring the web for new interactions and taking advantage of new technologies—while always keeping in mind that the right interaction or technology is the one that best meets the persona’s needs, and not merely the newest or most exciting. Interaction designers also stay current by following thought leaders (like the notable designers below) on Twitter, and pushing the medium forward themselves.

Tools of the Trade

Interaction designers use a number of different tools to get their jobs done. Whether they’re sketching an interaction on a napkin or presenting a prototype to a client, their goal is the same: communication via conversation. Above all else, interaction designers need to communicate well. The list below is a sampling of tools used to facilitate conversations. Keep in mind that the web interfaces that are eventually created, are typically done so with user-facing (front-end) technologies such as CSS/HTML. Balsamiq Mockups is an Adobe Air app that makes wireframing an interaction easy. The team at Balsamiq has done a superb job, providing users with a number of interaction design patterns that are ubiquitous to contemporary application design. What’s more, Balsamiq keeps their interface simple, using a hand drawn style for elements and comic sans as a font face. This enables the designer and stakeholders to focus their efforts (and their clients’ feedback) on interaction, by removing the extraneous design elements. Think of it as an online version of paper prototyping!

InVision is a free web and mobile prototyping tool, for Mac and Windows. InVision is designed to facilitate communication, and does so by integrating with Photoshop, Sketch, Slack, Jira, and other applications. Designers can upload wireframes, and connect them via hotspots. Clients, stakeholders, and colleagues can add comments directly on the design, and with LiveShare, InVision’s real-time presentation tool, the app enables live whiteboarding. Omnigraffle is the premier diagramming software for Mac OS X. Interaction designers can take advantage of the rather bland aesthetic created by diagramming software such as OmniGraffle to focus their team on the interactions behind their designs rather than on the design itself. OmniGraffle offers a number of nifty features, including: click-to-reveal functionality (for example, you can show how a modal box works), sketching/bezier curves, etc. No one wants to waste time reinventing the wheel. A good interaction library saves time and energy designing or coding a common interaction, and ensures consistency across designs. Patternry is a tool that allows teams of interaction designers to share and store their design and code assets in one central location (i.e. the library). What’s great about Patternry is that it’s more than just a repository; it also provides a starting point, with dozens of patterns for common interactions and modules. Sketch is a design tool (Mac only), best used for icons or medium-to-high fidelity mockups. A lightweight alternative to Adobe Photoshop, Sketch offers layers, grids, and artboards; in short, everything an interaction designer requires to create wireframes and mockups with some visual additions. Want to get more out of Sketch? Consider Zeplin, the Sketch plugin (currently in Beta) to allow for team collaboration. Axure RP is arguably the best interaction design tool on the market. Boasting far more robust functionality than Balsamiq, built-in collaboration and sharing, and the ability to easily convert a wireframe to a prototype, Axure seems to offer everything. The one downside is that it perhaps offers too much, which means it has a slow learning curve. UXPin is a collaborative design platform that supports lo-fi wireframing to hi-fi animated prototyping. Designers using Photoshop or Sketch can import their work for layered prototyping, then get feedback from their team and other stakeholders. UXPin facilitates interaction design with dozens of built-in interactions and a custom animations editor. The tool also includes usability testing and live presentation functionalities.

An interaction designer is still an IxD whether or not they belong to any particular group. Still, finding other designers is a great way to network and learn from others in the field. All of these associations are available across the United States, and some exist internationally as well.

In their own words:
the IxDA network provides an online forum for the discussion of interaction design issues as well as other platforms for people who are passionate about interaction design to gather and advance the discipline.

Although the AIGA (American Institute of Graphic Arts) was initially founded for graphic designers, the organization itself realizes that graphic designers are more frequently designing compositions for new media, in which interaction design plays a major part. Local AIGA chapters are available throughout the United States, and host events ranging from Photoshop Layer Tennis, to art exhibitions.

To be fair, there is no one Meetup group. That’s the beauty of it: search “interaction design” in your city on the Meetup interface or go to http://ia.meetup.com/, and you’ll find any number of networking groups, educational groups, and social groups. If you happen to live in an area where an Interaction Design (or User Experience Design) meetup doesn’t yet exist, now’s the time to start! As it happens, Meetup’s interface also makes it easy to start a new group.

Thank you to UXBooth for this detailed article. To read the web version, click here.

3 Free Tools to Crop and Size Images Without Photoshop